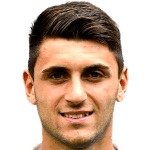 National Team: Italy it  Other: Germany