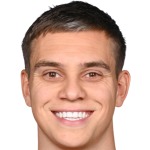 Born: December 4, 1994 in Maasmechelen, Belgium be

vs. Att Mid / Wingers
vs. Forwards
vs. Fullbacks