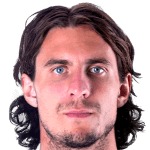 Compare Daniel A. Pedersen to