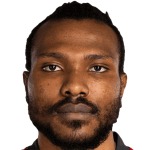 Citizenship: United States us  Other: Nigeria