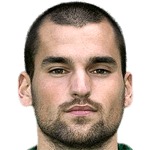 National Team: Montenegro me  Other: Sweden