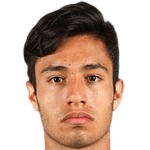 Citizenship: Italy it  Other: Argentina