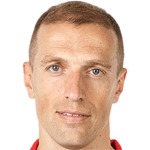 Born: November 20, 1983 in Općina Sanski Most, Bosnia and Herzegovina ba