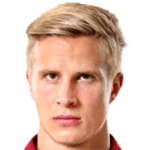 National Team: Austria at  Other: Switzerland