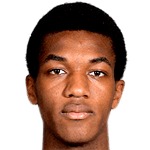 National Team: Belgium be  Other: Haiti