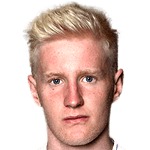 Compare Will Hughes to