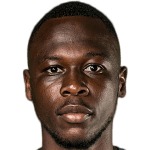 Citizenship: Belgium be  Other: Guinea