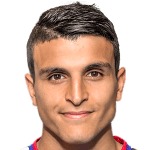 National Team: Norway no  Other: Morocco