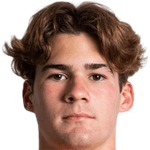 Born: September 6, 2003 in United States of America us