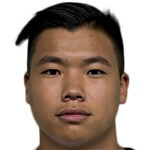 Compare Yannick An Hoa Hahlen to