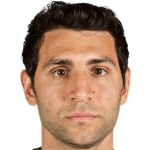 Please note, this player has 9 seasons in our data set in leagues or competitions we have not yet verified. These seasons do not yet appear on this page, but will once verified.